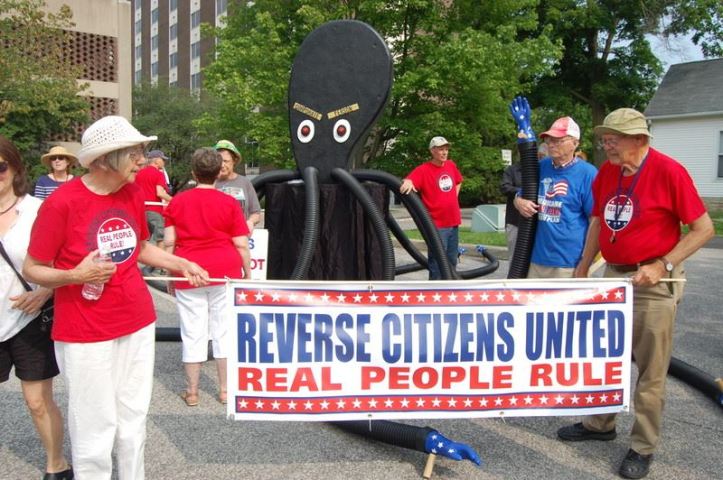 Since 2010, Unplugged Campaign Monies are Corrupting Eight Critical Areas of our Republic

Typically, octopuses live in oceans and coral reefs. Yet Octi the octopus is the land-locked mascot for Reverse Citizens United (RCU) in Bloomington, Indiana.

RCU was formed when Monroe County citizens became concerned about the hoards of cash that would pour into election campaigns as a result of the Supreme Court’s Citizens United decision in 2010. Educating others about their concerns is a major initiative for RCU and that’s where Octi wades into the picture.

Tomilea Allison, a former mayor of Bloomington (1983-1995) and co-founder of RCU, had the notion that Octi’s eight tentacles could metaphorically represent eight distinct, yet overlapping, aspects of society where “dark money” literally buys our government, subverts our democratic institutions, and establishes a plutocratic system devoted to the exclusive financial benefit of the 1%. It didn’t take two minutes of online search before Jim Allison, Tomi’s husband and RCU co-founder, found multiple iterations of the octopus similarly used in parades and festivals all over the world. One contemporary example includes “Kochtopus.”

Jim explains: “We think our Octi is the perfect embodiment of a creature that Jane Mayer calls ‘Kochtopus’ in her 2016 book, Dark Money: The Hidden History of the Billionaires Behind the Rise of the Radical Right. The key figures in her hidden history are two oil billionaires, Carl and David Koch, she decided to give the name ‘Kochtopus’ to the many-tentacled network they designed, financed and deployed to execute their plot.”

For RCU each tentacle of Octi represents an attempt at the plutocratic subversion of the key public sectors that ensure we have a vibrant and healthy democratic society: education, environment, government, health care, labor, media, politics, and voting.

A giant sized Octi will be swimming through crowds at the annual the Independence Day parade in downtown Bloomington, Indiana on the shoulders or sixteen or more social activists. They continue to march for a democratically elected government that represents all Americans, and one that is free from the corrupting influence of corporate dark money.

Finally, realizing the power of political cartoons, RCU reached out to kindred spirit and well regarded local artist Joe LaMantia. He obliged with a two-dimensional rendering of Octi in the style local fans savor.

Joe offered to do what he could to further the RCU campaign to inform and alert the public about the impending threat to democratic government. Whether on the printed page or in a parade Octi gets the RCU message out swimmingly.

Reverse Citizens United: Real People Rule is a nonpartisan grassroots organization in the greater Bloomington, Indiana, area dedicated not only to passing a 28th amendment to the U.S. Constitution stating that corporations are not people, nor money, speech, but also to supporting any action that will blunt its impact.