These publications provide a comprehensive overview of the problem of corporate personhood. A few have condensations attached for convenience.

Hacker, J. S., & Pierson, P. (2010). Winner-take-all politics: How Washington made the rich richer–and turned its back on the middle class. New York:Simon & Schuster. Read a condensation of this book by James Allison.

Hartmann, Thom (2010). Unequal protection: How corporations became “people” and how you can fight back. San Francisco: Berrett-Koehler (2nd ed.).

Mayer, Jane (2016). Dark Money: The Hidden History of the Billionaires Behind the Rise of the Radical Right. Knopf Doubleday Publishing Group. Read this insightful review in the NYTimes.

Nace, Ted (2003). Gangs of America: The Rise of Corporate Power and the Disabling of Democracy. San Francisco: Berrett-Koehler. Read a condensation of the book by James Allison.

Blumenthal, Paul, and Ryan Grim. The Inside Story Of How Citizens United Has Changed Washington Lawmaking. Huffington Post. 26 Feb. 2016. A really excellent piece on how Citizens United has corrupted our national politicians. 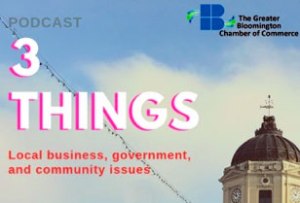 Former Bloomington mayor Tomi Allison and her husband, Jim, spoke with Chamber CEO and President Erin Predmore. The conversation centered on gerrymandering–how it works and why it matters.